New in this version:

Qt fails to open the file requester box in the requested directory for quite a few versions now. I have finally added a work-around.

Qt under certain conditions returns a directory though only files were requested. I have added a catch.

Fixed a problem where the disassembler was not informed about memory configuration changes and would crash when reading from old memory.

Fixed colouring of assembler instruction at the CPU's programme counter.

Fixed that setting r/w/x breakpoints in the disassembler view corrupted the memory byte.

Added requested feature: Display in disassembler view now follows the PC while debugging and slow motion of the CPU (≤1000Hz).

When key "A" and a modifier key is down, if you release the modifier also released key "A" though it was still down. This is fixed in zxsp linked against Qt 5.3, but in this version, which is linked against Qt 5.11, it is replaced by some other wrong behaviour... Luckily enough this is pretty rare and only affects key "A" because the key code of this key is 0x00. 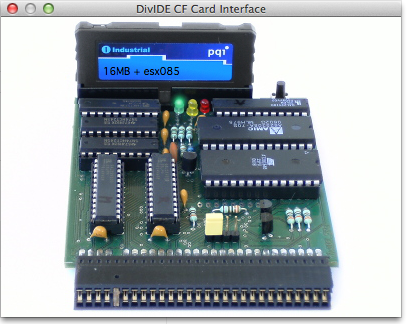 This is the great new addition: support of the DivIDE interface. The interface can be added to most machines with a ZXSP system bus. zxsp remembers the recently used rom and hard disc file. Initially it defaults to esxDOS 0.8.5. From the context menu of the DivIDE inspector you can create new hard disc files which are preset with SYS/ and BIN/ folders for esxDOS 0.8.5. From my web site you can download hard disc image files for some different dos/versions with a bunch of demos and some games. Don't expect them all to work, at least not on every model. B-)

The yellow jumper: If you own a DivIDE interface you'll know it: it enables the rom (actually the automatic rom paging on certain hook addresses) and disables writing to the rom. If it is removed you can load a .tap file (or similar) and write it to the rom. I suggest to save the rom thereafter or next time you'll have to load it from .tap again.

The push button: This is the NMI button. if you click on it, it should start the waiting dos on your DivIDE interface which will show the hard disc's contents and provide some other functions as well. You can load quite a lot of different types of files in esxDOS: .tap, .scr, .sna, .z80, .trd and maybe others. But many files don't work / on every model. They don't work on the real thing as well (mostly, probably).

The hard disc image files: zxsp knows .img, .dmg, .iso and .hdf files. It does not support all variants of the .img and .dmg files, actually only the very basic uncompressed formats. You can mount them in OSX as well and fill in files. Then unmount them and insert them into the DivIDE interface. Note that the DivIDE interface can write to the disc image and eventually corrupt it, though this should not happen. From the DivIDE inspector context menu you can write protect the disc or you can write protect the image file itself in OSX. Creating a disc file which works with fatware is very tricky in OSX. Actually i don't know how to do it. But phoenix^ra supplied me with a .hdf image which works with fatware and i have made a .img file from it. You can download it from my web site. See link above.

The current release of zxsp has some known bugs at the moment of release (as opposed to bugs known after releasing ;-) )

TS2068 emulation has some problems: it frequently crashes in Basic, e.g. if you try to save or load a file. Timex Command Cartridges (dock roms) seemingly work fine. If someone has an idea why Basic crashes every now and then i'll be thankful to know. I'm stuck.

Writing to tape probably only works if you enable instand load/save and write using the standard rom routines only.